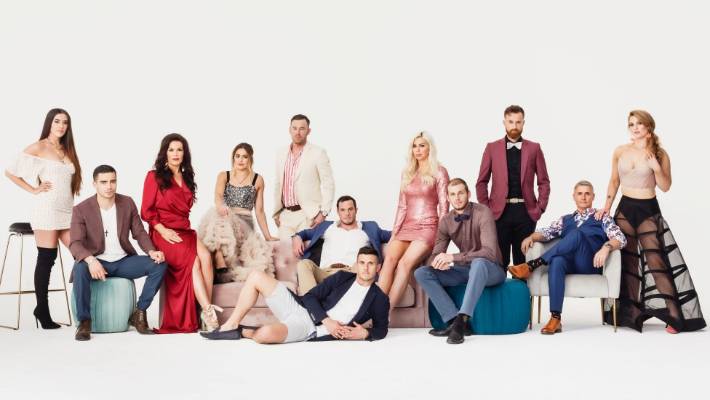 Well it has taken me a few years to finally decide on the winner of the inaugural ‘Grumpy Old Kiwi Man’ award for ‘mindless television programme featuring morons’, but I can announce this year’s winner…..

It is the eagerly anticipated series of Married at First Sight 2019.

I have always avoided watching this dross, but foolishly read the recent Stuff article on it (featured here and acknowledging the image from their article).

The first thing that struck me was that if they all posed together for the publicity photo, it isn’t ‘first sight’ is it? So that zeroes out the publicity marketing on that one.

Secondly, they profiled all these nitwits who have happily signed up to meet some anonymous fellow moron, and ‘tie the knot’.

Reading the profiles of these budding wedded folk, it became apparent why they elected to go on this inane show.

They quote things like looking for someone who is ‘funny and honest and has good family values’. Well roll me in breadcrumbs and deep fry me but I haven’t met anyone yet keen to meet a depressed liar who hates kids.

Then there is the lady who has a ‘firm belief in love at first sight but has also had three unsuccessful marriages’. Well getting hitched for a fourth time after meeting someone for the first time is a sure fire way to eternal married bliss… *NOT*

We have the guy who clearly hangs around beaches a lot as he proposed to a lady on a beach while someone played a saxophone, then escaped a tsunami with his children, and loves whitebait. I’m hoping the 3 times married lady likes to swim a lot.

Then there is the guy with his Harry Potter inspired tattoos, and having been struck by lighting twice. Give me a break !

Finally we have the guy who proclaims that he “does not believe in love at first sight”…. ok … so what is he doing on this show then?

But the ultimate idiot has to be the guy who describes himself thus… as a “mixologist and dabbles in iguana wrestling”.

For me this was the final straw. I always liked iguanas and hate to see them being wrestled.

The show gets the award but I won’t be adding to the viewing figures on it.